The big day - my baby boy is at SCHOOL! 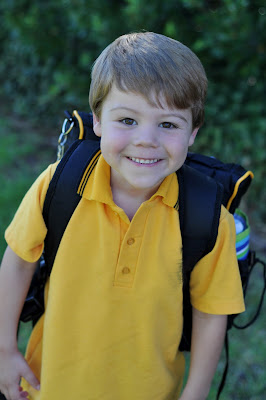 That's right! This little guy is now officially a school boy. (Excuse the smudge on his top - I hid the school logo for the blog for security reasons). After an early start to the day, we fed him up with as big a breakfast as we could get him to eat, packed his bag and delivered him to school with lots of hugs and kisses, including a special kiss from his baby sister as we left. While a little shy, he was very excited, and got stuck straight into the activity, drawing me a tree and an owl. At home he just draws scribbles so I was thrilled to see some detail in this one, I just love the way he did the leaves. 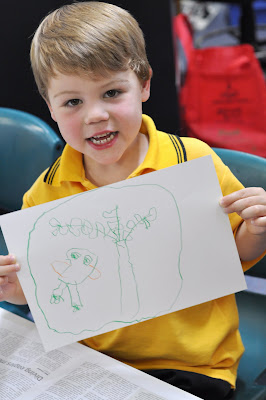 Of course, Madelyn thought she was a school kid too and had to steal a place at the desks (luckily there was a child absent this morning at Austy's table). I met the new head mistress, who asked me if Madelyn was 3, and as soon as I replied, "No, she's just turned 2", my little toddler tugged at my t-shirt saying "Excuse me Mummy, where is my dwink?" as she wanted to put it in the tub with all of the other school kids' drinks. I think we wiull be hearing that mistake a lot as she certainly talks like a 3 year old. Not long after she was threading tiny beads onto a string with the big kids, so I think she will be growing up fast enough! 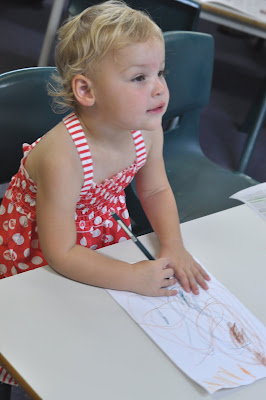 In the meantime, I have been plugging away at a few little projects, including 3 pairs of training pants for Madelyn (no pics as they just keep getting snatched to be worn, and then promptly weed in!), my Quilts for Queensland blocks (one for the boys)... 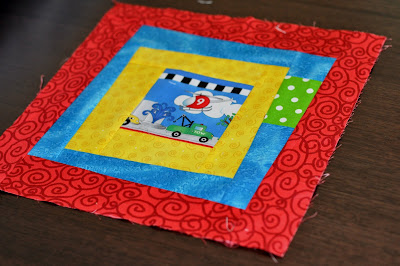 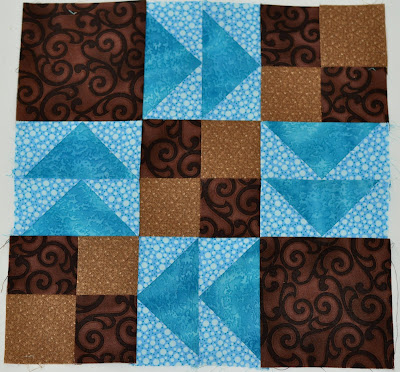 ...and trying my hand at FMQ as I put together some potholders for the EB potholder sew, show, swap. 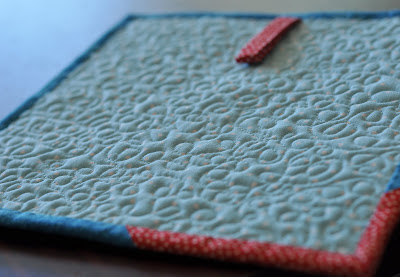 Here are my 4 different completed ones, with another one waiting to be quilted (it has cupcakes on it and Madelyn alreeady thinks it's hers, so I may have to do another to keep here!) 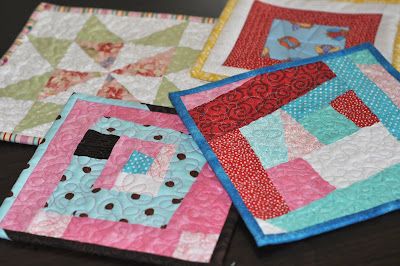 I am enjoying some time off from work while we settle our boy into school, so hope to get some quality sewing time in when Madelyn naps. Ah, the joy of being a SAHM (even if it is only for a week!).
Posted by Austysmum at 12:09 pm

What a precious day for you. I hope that he enjoys school very much! You will find him saying and doing things you find amazing.

Maddie is also so precious with her wanting to play. Olly does this too :) Enjoy TT as well, we are still trying and failing.

I hope Austy had a lovely day at school. Maddy looks so cute sitting there all ready!

I bet Austy has been busy telling you stories about his first day all afternoon! Cheriese was(is) the same as Maddy, she would fit right in at school already I think.

How cute does Austy look in his school uniform. Good luck with the TT'ing - we tried with Ella a couple of times and then waited until she was ready - which was 2 years 10 months and she got it in a couple of days.

I am so glad that day 1 went well, he looks very happy. And i love that boy block, it just POPS, great work.

And look how proud he is! So cute. And how precious that Madelyn wanted to stay too!

ohhh I am loving looking at everyone's school photos! adorable! yes I had a couple of photos with my cute keira in uniform that didn't make it to my blog as you could see her emblem etc!

Hmmm, what lovely pot holders! I'd love a new one or two to show off your handiwork Joy, the last one you made me is still treasured and used, but is getting a little tired and stained from use. (Mum)