My mailman has been super delightful this past week: 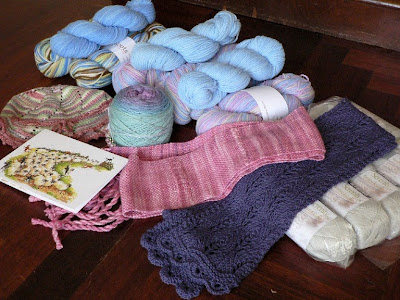 I got my Family Roots Coop yarn (yummy First Beach and Emily colourways), a 10ball pack of Patons Serenity DK cotton/bamboo that I got off ebay for a song to make something for ME for next Summer (knowing my pace with big things I thought better to start sooner than later plus I couldn't pass up this great deal), and a WONDERFUL swap package from Celia for the 100g Challenge swap. I got TWO scarves as gorgeous as each other, both wonderfully soft, plus a skein of her scrummy gradient yarn, and some stitchmarkers. For Madelyn she sent this super duper cute hat, and Austy was thrilled with a book about the movie Monsters Inc (his favourite!!) She did some FABULOUS stalking!

For the Ravelry 100g challenge swap, I sent this little bag of goodies over to Kelly. 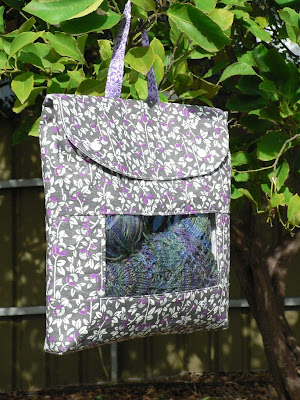 This is my prototype project bag, that I am thinking of making some to sell on etsy or madeit. They close with snaps rather than a zip because if you are working with straight needles you might need to poke them out the top corner of the bag. These little bags are designed more to keep multiple WIPs seperate in a larger knitting bag (thought up when I recently had to detangle three projects from each other after one of the kids threw my knitting bag to the floor!). A better solution would be to finish one WIP before starting another, but you know I could never do that! I thought there might be others out there like me. I lined the bag with a contrast fabric and put a second contrast in as a pocket that can be seen through the window when the bag is empty. I made this bag with sew in interfacing to stiffen it, but I think I would much prefer to use an iron on medium weight interfacing (but I used all that up on Austy's bag so I didn't have it on hand). The finished bag isn't much different but it would be a heck of a lot easier to sew! Especially with that PVC window. 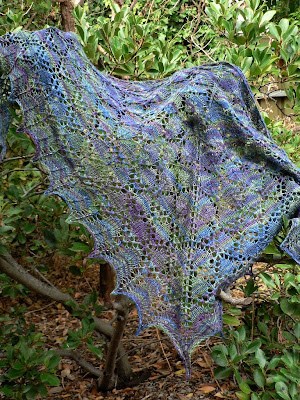 Here is the shawl that you can see in the window of the first bag shot. My first ever knitted shawl, and I even tried out beads for teh first time. I didn't do so well on the 100g part of the challenge as I still had a bit left after adding extra repeats in the body of the pattern. I planned to add an extra border repeat to get more beads involved and use up more of the skein but after Milo attacked it, and I had to start the border again, I couldn't risk continuing past the pattern's border length with a deadline fast approaching. Nor did I think I could face frogging again - and I think Milo was drawn to the sparkle of the beads so the quicker it was off the needle the better!!! 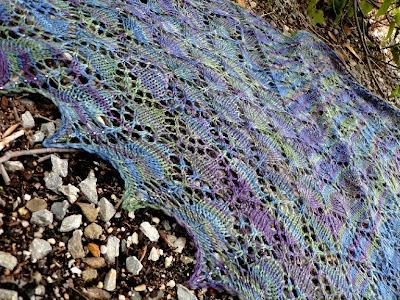 This picture shows how I have placed 6 beads on each of the points. 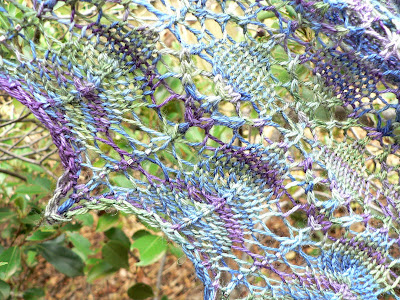 And as I showed you last post, I was working on a pink swap too. This is my last sneak peak of the pink stuff. And a reveal of the bag itself (since I don't think my swappee is checking my blog). I have included extra gooodies like lollies, pink sticky notes (with roses on them) a smiggles pen,and the knitted washcloth and pink beaded row counter I showed you earlier. 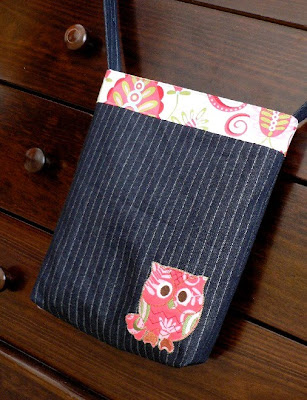 According to DH, this outfit makes Maddy look very retro. I finally got around to finishing those pants, that despite being quick and easy, sat at my sewing desk unfinished for a couple of weeks. I hate doing ruffles but love the finished look. 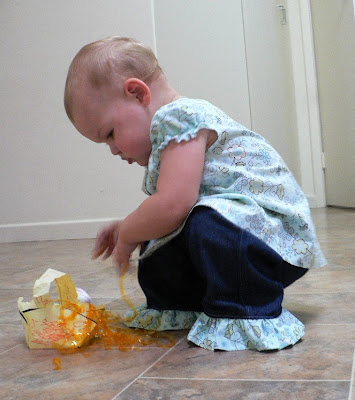 They are a little long at the moment as I added length so they would last my little sunflower more than a week or two. She just keeps zooming up and is already 86cm tall - the size of an average 2yo girl, despite being only 15m. Unfortunately there are no decent pics due to it raining outside and my camera needing things to sit still for more than a split second when I take photos indoors. 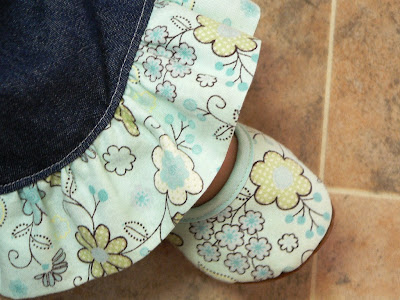 I dyed up some more wool too, this time to be given away as a part of the ravelry pink swap. (But I must admit I dyed extra to make something for Maddy, which... ummm... errr... is already on the needles along with half a dozen other projects - woops). 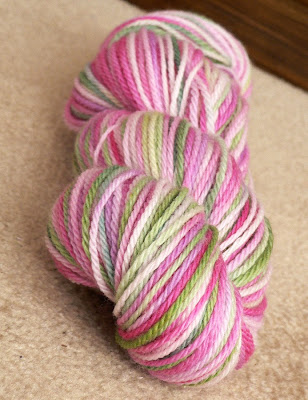 This skein of handpainted wool will join this facecloth and row counter in a package to my swap partner next week. 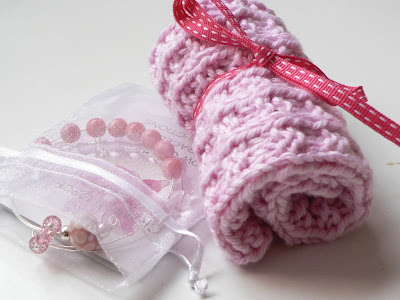 I just need to turn this little owl into a bag to send it all in first. 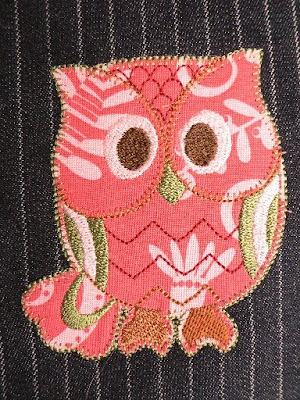