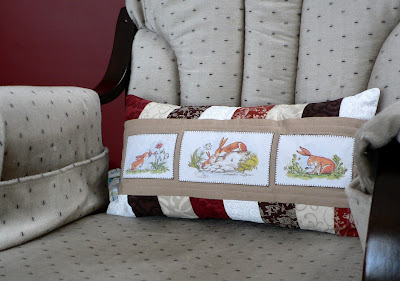 Things have been rather slow on the crafting front due to so much illness in the house (you can read about where the last month has gone here if you are really that interested, so I won't go on about it again). But with all the recent rocking through the night I decided it was time to drop everything and finally get onto that lumbar support cushion I needed for my rocking chair. I found that if I sat in it cross legged I could sit right back and it was fine, but then I'd get up to put Madelyn in her cot and my legs would be asleep (like te rest of me wanted to be!). And if I sat like a normal person, the small gap at my lower back meant my back would hurt after an hour of rocking. I had this same chair with Austy but bought a cute little animal pillow to use with it, which he now sleeps with so I couldn't be so mean as to nab it for me! Instead I made the perfect little lumbar cushion to match her room. 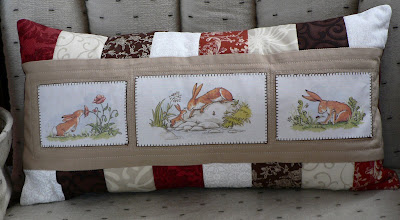 A quick little project to help get my sewjo happening again and back into quilting. Just the perfect size project to tackle between the multiple wake-ups after Maddy was down for the night, without having to stay up till midnight to do it (not a good thing when you're only getting an hour or two sleep at a time...). 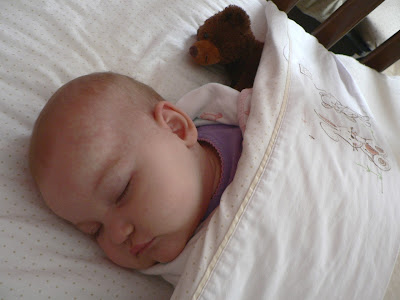 For those who haven't seen Madelyn's room, her bedding and decor is mostly natural tones with white and chocolate and she has a cranberry/burgandy coloured feature wall as I thought it brightened up the classic naturals look a bit. Her cot is adorned with a cream wool blanket in the winter and white and cream sheets, and in the summer we used the "babychino" coloured cellular blankets All around the white walls (not the feature wall) are the "Guess How Much I Love You" wall stickers as I loved the book when Austy was a bub and thought they "baby-ed up" the older looking colour scheme. I had been looking for some traditional looking teddy bears to border the room with but only saw very modern and bright bears that weren't really my style and I really wanted to stick to the neutral colours without pink or blue. Then I came across the perfect cot set that had both a bunny and a bear embroidered on it and thought, why don't I do both?! So I still have this teddybear mobile in my WIP pile: 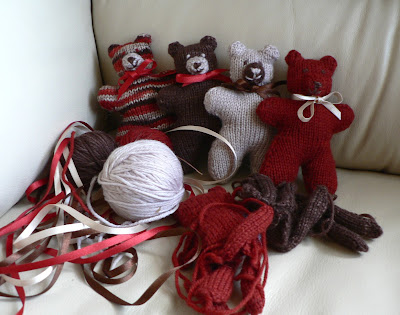 I am blogging it again now as I need to motivate myself to get it finished! Madelyn is at the age now where dangly things are all the rage - you should have seen her giggling her little head off at playgroup as we walked under some paper snakes that the kindy kids had made and hung from a net at the ceiling. So as soon as her "Helena" knitted jacket is finished (only a half a sleeve to go and a button band and ties) to keep her warm in this cool weather those bears take next priority in the knitting department! I only have to knit one more bear and it's been like that for ages, but I just hate doing the stitching up so was trying to force myself to stitch a bear before making the next so I didn't have too much stitching to do all at once so it wouldn't end up on the WIP pile forever. Well that didn't work did it? I just dropped the project! So getting them all out to photograph is meant to spur me back into action. I hand dyed the wool especially to match her room as it was so hard to find anything but pastel baby wool. I still haven't photographed her room as it is waiting on this mobile and perhaps some bunting - the poor kid will be a teenager before her nursery is finished at this rate! 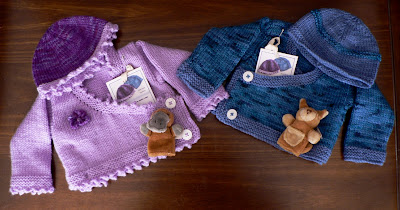 On a sad note, the lovely Jennifer who I knitted for as my part in the ravelry baby swap, gave birth to her beautiful twins too early. Annie Blythe and James Edward were born at just 22 and a half weeks gestation. Darling little people they were, so tiny and with so much love, each lived for just a half an hour before leaving this world. I have sent on the knitted garments anyway, as Jennifer has said that she'd still love to receive them and put them aside with the other keepsakes they have for their twins. I made them each a kimono and hat from "Natural Knits for Babies and Mums" (borrowed from the library) using some soft 8ply 100% wool that I hand dyed (except for the solid lavender - that's how it came and I only thought to hand dye some when it came to the embellishment of that jacket). The package was mostly for the babies, including some preemie gowns as there was always a risk of them being early, but will be followed up shortly with something else I have planned to make for Jennifer and her husband in their memory.
Posted by Austysmum at 2:09 pm

I love the cushion, the fabrics look terrific. And I'm always in awe of your knitting talent! How sad about the twins; I think it really touchd me because of the boy's name. I think your idea is wonderful, and though I don't think I got around to replying in the thread, I would keep it as simple as your initial suggestion.

The cushion is delightful, but the mobile really caught my eye! What gorgeous, rich colours! I was so sad to read of your friend's loss. She's fortunate to have you in her life.

The cushion is very cute Joy. So sad about the twins. Beautiful keepsakes will help the parents a little. It would be so hard. I think you're lovely for making something else for them too. What a good friend you are.

"Wow" they turned out beautiful, you are a very clever lady Joy!! I am sure that Jennifer will treasure them and they will be placed with care in a memory box for the beloved Anne and James, Treasured little babies whom will always be loved ;-)

The little bunny pillow looks beautiful and I love the colors of her room too. The little teddy bear mobile looks very cute too, hope you can find some time to get it finished for her. The presents you made for the twins are just beautiful and I cant believe how sad it is that they only got to live for such a very short time. Life is so unfair sometimes isnt it. I am sure the mum will love having them to put into her memory box.

hi joy, i was just catching up on blogs and saw your note on the twins. it makes me feel so for them and their loss. this might be totally irrelevant right now, but a 'blog friend' who lost one of her twins began a beautiful collaborative place for families of lost babies. it is called 'glow in the woods' (www.glowinthewoods.com). it might be a place your friend could eventually find some comfort and mutual understanding. please send her my condolences. amiee