With all the illnesses in the family lately (mostly Maddy) and lack of sleep, I have been feeling like I can't keep up. I was almost ready to toss in the blog as it sometimes seems to be just another pressure, nagging me to get things under control so that I can get crafty again. It often seems that noone reads it anyway so I sometimes wonder if it's worth the effort.
I have so many plans to make this and that, but never actually get to do it, and it often seems too hard. I don't know how so many other Mum's do it, but I will openly admit here and now, that I am certainly no supermum! Keeping up with a busy (but adorable) 3.5yr old, who is very much a "play with me" kind of boy and a beautiful baby girl who'sbeen under the weather and needing a lot more cuddle time lately has kept me fairly occupied. That and the multitude of activities - playgroup, swimming lessons, story time at the library for Austy, baby chat at the library for Maddy, mothers group and the usual park trecks, game playing, train track building, crafting time and teaching Austy his letters and how to read (his latst request and it's gorgeous watching him try to read books by himself). However they are only little once so I plan to enjoy this time, even if it feels like I get nothing done.
But the blog stays. Instead of aiming big, I am tackling small projects, like this taggy block I made for Madelyn yesterday. Things I can achieve. And the blog will remain as a reminder of what I DO get done. I must stop comparing myself with other bloggers who seem to get a million things finished in the space of a week or a few rather large projects done as if they were nothing too time consuming at all (and I know they are). I don't know at all how they do it.
And a big thanks goes out to Ashley - you really made my day yesterday when you bumped into me at the craft market I was perusing to tell me that you knew me from my blog. It made me smile to think that hey, people do read this thing and I am not just jabbering on to myself. 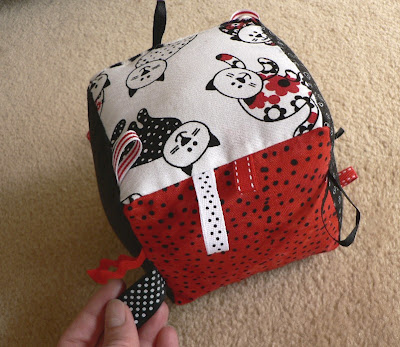 So I give you the taggy block, this week's small project. Made from 5" charm squares and a scrap of minky and suede cloth left over from her dalmation nappy for some tactile stimulation, and randomly placed ribbons and rickrack scraps for her amusement. I planned to make this ages ago which is why it's just black, red and white - perfect for a first baby toy, but she loves it anyway, even if it is months overdue, and the ribbons make it great to fling around and poke your fingers through. I was going to make some smaller ones to stach on top but since it's filled with pollyfil and not a foam block it's not really flat sided so I thougt it might be difficult for stacking. There is a bell inside for a little bit of a rattle, but boo to Spotlight where I bought the pack of 5 large "jingle bells" to find that only 2 of them acually jingled. 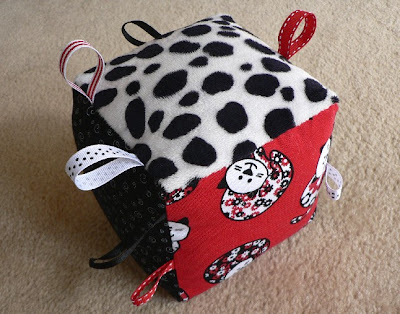 And not crafty at all, but since I am focussing on what I do get done, rather than what I don't, I do do a lot of baking. Cupcakes, biscuits, scones and the like with Austin as he loves to bake and it teaches him things like following instructions and measuring (and he loves to sift and stir), and lots of different new tastes for Madelyn who is really taking well to solids when she's not been unwell. Today's baking was these rice cereal and pear baby biscuits after Maddy got very excited watching me eat my pumpkin scones the other day but they were perhaps a little unsafe, crumbling in her mouth and potentially making her choke. So these will be a bit safer for her (perhaps not the stars and people shapes with bits that could break off, but hey, they make it interesting). I made them up as I went along so will document the recie here for future use, and to share with my readers who also have babies. 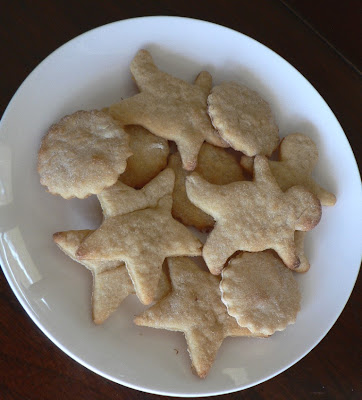 2/3 cup rice cereal (plain rather than flavoured)
2/3 cup SR flour
30g butter (could substitute for vegetable oil if your baby is intolerant of dairy)
1 pear, peeled, cooked and mashed


Sift the flour into a bowl and mix in the rice cereal. Rub in the butter. Make a well in the centre and add the mashed pear and mix well into a soft dough. Knead on a floured surface and roll out thin - be sure the dough is only a couple of mm thick as it will rise with cooking and could become cakelike and crumbly if the dough is too thick. Cut into shapes (round shapes are best so that bits don't break off, or cut into fingers with a blunt knife. Cook at 200 deg C (or 180 if you have a decent fan-forced oven unlike me) for 10-15 mins until golden but not brown. 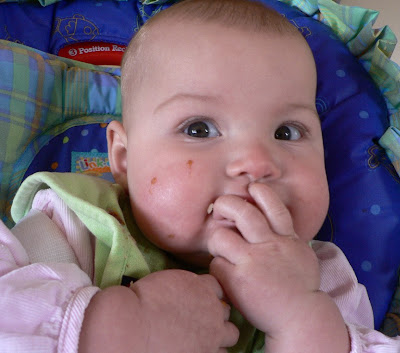 Joy, please don't feel that no-one reads your blog. Just because there are no comments, doesn't mean no-one read it. I really should make more of an effort to comment when reading blogs.

I am often astounded at the amount others get done and wonder how they do it (multiple births and all, haha - you know who you are).

I remember being amazed to see all the wonderful things you were making right after you had your own little Maddy (gorgeous knitted longies for example).

If you don't feel you have time to blog, do try and take a photo of what you have made, when you eventually get around to uploading you will see how much you have really achieved.

Thanks for the biscuit recipe, I don't know how you find the time to bake ;)

I still read your blog too ;) I'm just super slack at commenting, since I read it thru bloglines & have to open a new window to comment (I know poor excuse)

Speaking of bloglines, you have 69 subscribers (that's 50 more than me!) so you must be doing something right!

Love the softie for Maddy :)

Oh thanks girls - and I have no idea how bloglines works - I tried it once and gave up.

Joy, I admit I'm a blog stalker - I love looking at other people's craftiness and news and never leave a comment, so please don't think that your blog is for nothing. I love seeing your creations and photos of your little ones and I remember so well when K was little I didn't do anything crafty for ages - no time and no inclination (mostly sleep deprived). I love to bake with K too - it is a wonderful activity to do together and you both get to enjoy it! Thanks for sharing your recipe.

Hi, I just wanted to say that I'm a Mum of little ones too and haven't updated my own blog in a while either. I have a few crafty Mum blogs in my Reader and I love just catching up on how their kids are doing too. Its great when you have time for a craft project (you make such beautiful things) but gushing about the kids is good too. I will keep checking in on you!

Thanks for the special mention. I felt like a bit of a psycho stalker for approaching you but Im glad I did! It was kind of like meeting a famous person! I love reading your blog and seeing the beautiful things you make. You inspire me constantly!!!

Yay for keeping your blog, I love reading what you create and seeing beautiful photos of your kids too. It is hard being a full time mum and we dont get as much as we would like done when they are tiny. Sometimes it is just as hard when they are bigger too to get crafts done as I have a few things I need to take my daughter too every week, swimming and dancing, but they dont need their nappies changed or have to be fed by someone else. I think you are doing a wonderful job with your crafts and every little bit counts.