There hasn't been as much crafting happening around here as I'd like, but that's kind of what happens when the sleep dwindles. My baby girl is now halfway through her first year, with two bottom teeth and munching down solids, but for some reason, she's still sleeping terribly. We can't see any more teeth on the way yet, but suspect it is perhaps the result of starting solids and getting used to that (Austy slept well until the solids started) or maybe the result of the 6m immunisations and rotavirus vaccine. Who knows, I just know that lately she has slept much worse than a newborn at night, often waking 2-3hrly, or (gulp) ONE hourly during some parts of the night. At least Austy forewarned me with a similar great sleeping habit in the first 6 months only to be spoiled in the second half of his first year.
I've also had limited computer time too, so it's hard to update the blog - my laptop screen decided it's lived long enough! 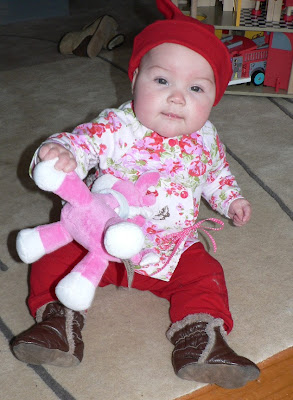 Anyway, I did manage this cute little 3pc set, that would have had booties as well but I used every last skerric of fabric on the rest of the set. Terrible photos, due to the very wet and cloudy weather we've had here lately and a bub due for a sleep who was squirming everywhere. It looks way better in real life, I just adore the "Baby Nay" fabric I used for the top, that I found over at Crafty Mamas. 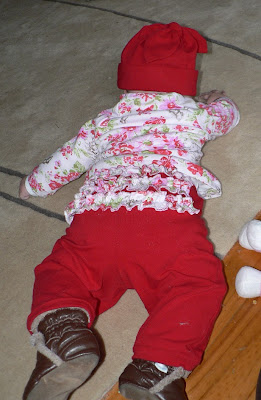 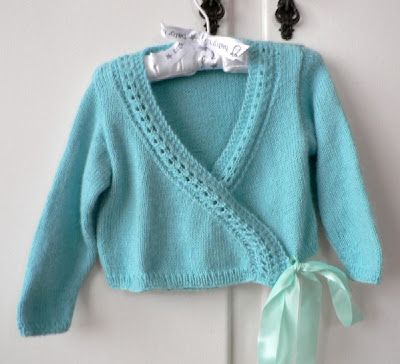 That cardigan is gorgeous. I can't believe it's been six months already.

Wow she's growing up so fast! I love the outfit, I have some of the baby nay fabric too, haven't used it yet. The cardi is just adorable too - I've just started one for my miss which is sized for 12 months, so I hope I can get it finished quickly otherwise it will be too small! (although my miss is a bit on the petite side)

Joy, I feel your pain. Tristan still hasn't slept the night through and he's 10.5 months. Romily slept through from 9 weeks, so it's been a bit of a shock for us too. I keep consoling myself with the fact that in several years time we'll be dragging both of their little bottoms out of bed to make it in time to school! Stay sane!

Love the knit Joy! Maddy is looking cutier with every month!

The cardigan is just gorgeous and she looks so sweet in it too. I love the outfit you made for her, she must be one very well dressed baby girl! My daughter never slept properly until she was about 6 years old. She was lactose intolerant as a baby and we didnt find out the cause until she was 8 mths old. By that time the no sleeping habit had set in but I am thankful that now she sleeps through the night. Tired mummies are no good at dealing with things on no sleep! Maybe she needs a little tummy rub before bedtime.

I love Baby Nay fabrics too! That outfit to so cute and so is the cardi.