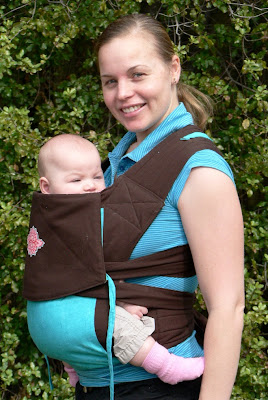 The one project I really NEEDED to get done to use on our trip to the US was a new mei tai carrier, as Austy's old blue one made me feel daggy, and when worn with the apron tie it wasn't tall enough to support a sleeping Maddy as well as I'd like. I used to wear it non-apron tie with Austy (less educated on baby wearing back then!) when he was about 6 months old, and by the time I worked out that the bottom was meant to fold under for better support he was old enough to support himself well and not sleep in it anyway. But for Maddy, at only just 4 months she needs good support and coverage for sleeping. So a marathon sewing day (between feeds of course) and I had a new, girly baby carrier! 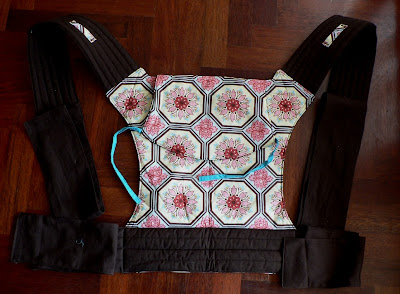 I used Sandi Henderson Ginger Blossom tiles as the feature fabric as it's just so pretty (and definitely girly), this is the side I will most likely have showing alot of the time. I was going to line it with aqua minky but decided against it due to it not being cold here for very long and made it reversible instead, using a Sandy Gervais solid panel in the centre, aqua of course! The strap fabric (and hidden internal stabiliser) is dark chocolate canvas from good old Spotlight which rang up as just $5/m when I got to the counter - bonus! 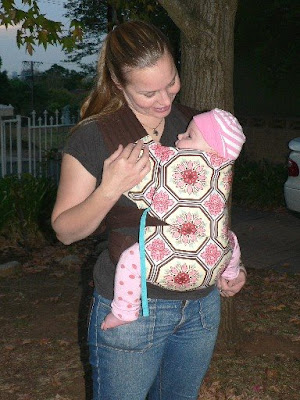 This time I added a hood, but Andrew tells me the hood looks like we follow some weird religious cult or think we're celebraties trying to sheild our baby from public view. Sigh.... I will still use it though as Madelyn has never liked the sun in her eyes and while she tolerates it better now, sun in her face when she's asleep is bound to wake her. I can also wear the hood folded down as a bit more neck support and padding as both the hood and body are padded with fusible fleece (pellon).
I was going to make up my own pattern from scratch again, having done that with Austin's and knowing where I wanted the changes to be made, but when doing my research to work out what features I wanted and didn't want, I found this fantastic tutorial, which had almost exactly what I wanted. I altered it slightly to suit the dimensions I wanted and went for a standard shaped padded hood, rather than the rounded hood to headrest on the tute. It seemed silly to reinvent the wheel when someone else had already done an excellent job of it. 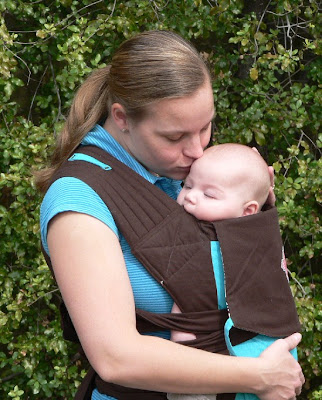 Madelyn loves her new mode of transport and actually cried when I took her out of it after an early evening stroll last night. I think she wanted to go to sleep in it. Don't worry, she'll get plenty of chances for that soon! We are taking a stroller but will just use it for meal times so I have somewhere to put her while I eat so I don't get hot food on her. So much easier to see things when you don't have a pram, and I don't have a pram that lets her see me now that she has outrgrown the bassinette. Please ignore the fact that I accidentally strapped her arms down (woops) - normally I pull them up so she can move them about and suck on her fingers but I was just getting it on and off quickly for a photo or two. 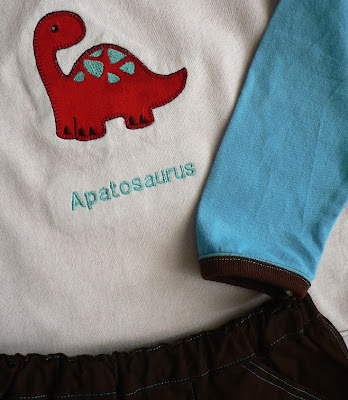 Also, it's time to reveal Dinosaur Roar V2 - Austy's set. Remember Scott's little set from the EB clothing swap? I promised to make Austy his own dinosaur set and he loves it. 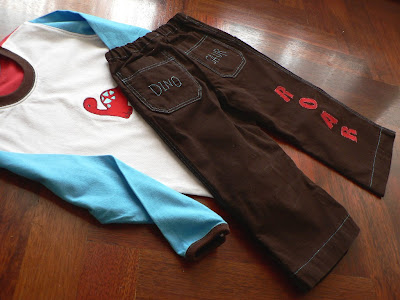 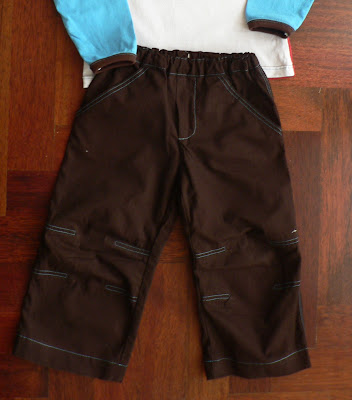 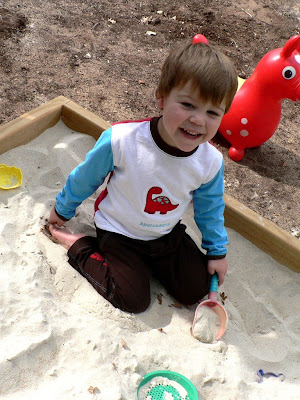 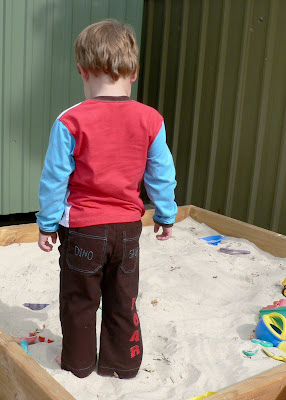 The mei tei is great Joy, Maddy looks really comfy in it. I will definitely have to make myself one if we go for #3. And the dinosaur set for Austy is too cute! Love the detail, well done!

You did a great job on the Mei Tei - I am sure that it will get alot of use on your trip.

LOVE Austy's new duds - they look great and he looks every so happy with them.

Wow Joy that Mei Tei is great - looks so comfortable.
The dinosaur outfit is adorable, the red looks so great with the chocolate and blue.

gorgeous.... we love our hand made mei tai also. I omitted the hood as I didnt think I would need it but it would have been handy.. I love your fabric. well done.

Fantastic sewing as always! The mei tei is gorgeous and I love all the details in Austy's outfit!

Absolutely gorgeous! Your kids are lucky to have a talented mum. Have fun in US.

WOW the meii tei is amazing! Well done, your little girl looks soo comfy in there! The dinosaur outfit is great! Lots of details and looks so cute on! Have a wonderful time in the US!

The Mei Tai looks great, and so does the dinosaur outfit. DS would love one of those outfits I am sure - he is sooooo into dinosaurs. I wish I have an embroidery machine too.

What an awesome Mei tei Joy! The fabrics are perfect for Maddy.

Austy's set is just too cute!

Wow, I love your Mei Tei, the ginger blossom is just lovely! Austy's outfit is adorable too.

Love the mei tai. I think I might have to have a go at making one for Sam. Enjoy your trip.

I love the Mei tei and the outfit for Austy.
Hope you have a great trip to the US.

Fabulous job on the sewing!

Fantastic work Joy!! They both look great. How big is Maddy now?

Wow! The mei tai looks great. I am glad you found the tutorial helpful :) Brooke

Wow you make amazing stuff! The Mei tei is fantastic.