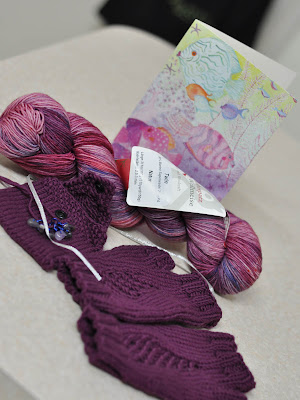 Our little Ravelry group hosted a "New Year's Colour Swap" that arrived just as I posted in here last, but my parcel (which was a little bit late) hadn't yet landed at it's destination. I picked "purple" and was once again spoilt by Celia (who also had me for the 100g challenge swap last year), who sent me some gorgeous Wollmiese sock yarn that she dyed herself, a cute little handknitted pouch containing some tiny gemstone knitting markers (great for sock needles!) and a pait of handknitted mitts. Then in my Ravelry library, I found her sock patterns, one for "Slippy Socks" a simple sock pattern, great for sock beginners like me, that ranges from toddler to adult, and a lpretty "Boiudior Booties" pattern. I have one pair of knitted socks that I made when Austy was about 14m old, and I love to wear them in winter under jeans, or just around the house at night when it's cold. It's amazing how much warmer they are, but that paior has seen better days. I decided I needed to make myself some more so Celia put this package together accordingly. Photos don't do the yarn justice - it is divine in every way, I have it handy and keep picking it up to ogle and touch it. These will be my "happy socks" I think as they will be like a little toe hug from myself. 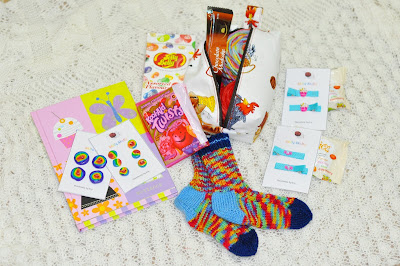 Here's the parcel I put together, for Claire, who was the one who sent me a parcel in last year's colour swap. Her colour theme was "rainbow", so I made her little 1yr old boy some rainbow socks, dyed some rainbow Woolganics (shown in the blog post below), made some rainbow buttons, collected together a rainbow of Kool Aid I had in my stash for her to use in wool dyeing with the kids (it's much safer than acid dyeing for the little ones as there are no toxic fumes). 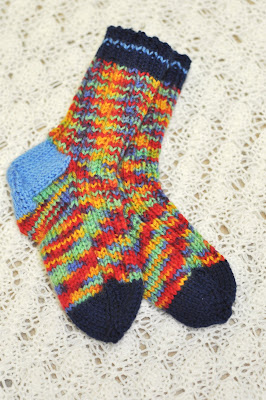 I found some fabric with knitting chickens on it, and had to have it to make her a little boxy bag to tuck the wool into. I was going to cover the journal with a Bloom Journal cover using denim and a rainbow strip, but I only got as far as making the strip so that will now become something else. At least the journal had a few colours on it already. I also made some clips for her three girls (yes there are only two sets here, but soon after I took the shot I realised there was another girl to make some for and got cracking!) and packaged them up with some rainbow coloured SPC "Chompioes" lollies, and tucked in a box of gormet, rainbow coloured jelly beans for Claire, along with some chocolate mudcake coffee satchels.

I also managed to FINALLY get around to making Austy's art smock for school to save me scrubbing out the t-shirt stains all night long, although the plastic on the front makes it horrid to photograph (at least it stops the paint seeping through and that tell-tale line across the front of his school tops where he has been leaning over the table). 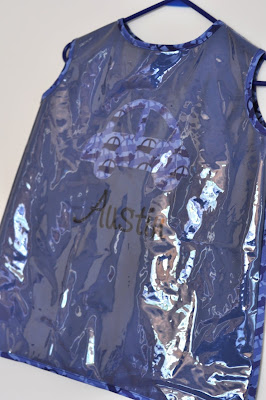 It was just cheap fabric I had from Spotlight from a couple of years ago, once upon a time destined to be sandpit trousers (no pockets to catch the sand) for kindy/home but never made it to the sewing desk. I found a good use for it now though, and the embroidery machine is fabulous for making sure noone steals his things. I now have his name saved in the memory card in two sizes (large from the art smock and medium from the library bag) so I don't have to input one letter at a time onto the tiny screen again. And seeing as I am finally getting around to things, I made a new night nappy for Madelyn last night. Her old ones need the elastic replaced, but I am too lazy to repair them and just made a new one instead. I was going to make more, but unfortunately I am out of bamboo and hemp fleece. Now considering whether I should buy more or repair the others. She is still a little way off training for nights so I think I might be safe to grab a couple more metres. I forgot how soft and squishy a new night nappy is...they don't look like this when they've been worn every third or fourth night for a year! 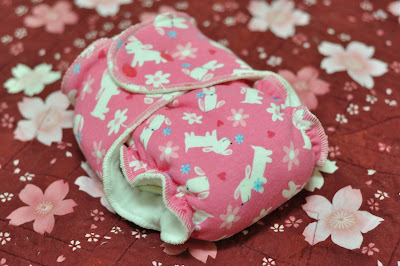 And a knitting WIP for my boy - green socks at his request, made with Celia's "Slippy Socks" pattern which I modified slightly, adding in a cable at either side. I dyed this baby wool I had stashed away from when he was born (it was meant to be a baby cardy for him). It was a very baby blue, so I dyed it to suit his colour request. He was dissapointed at first because he wanted a brighter green (I can't believe a 5yr old has preferences as to which SHADE of their favourite colour they liek best!) but he loves the texture and wouldn't take it off after the try on, wanting to rub the top of it (where the bumpy slipped stitches are) with his other foot until bath time. I don't think he will let this sock succumb to single sock syndrome - he will be on at me every klnight until the second sock magically appears! 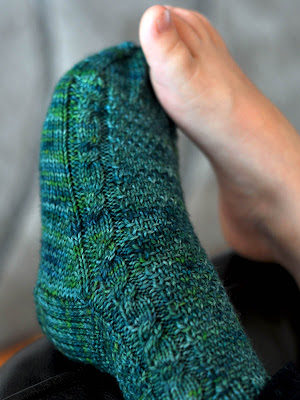 Great parcels, sounds like a good swap! I really like the art smock, and yes scrubbing out pain off t-shirts is horrid. I have to say that is the perfect green, and what a great pattern.

How nice these..great handy work.
These are really inspiring.Keep it up!

Great knitting, I wish I had the time to be as creative as you are.

Keep up the great work !